September 10, 2013
Love without a price tag, conditions attached or the fine print of debt 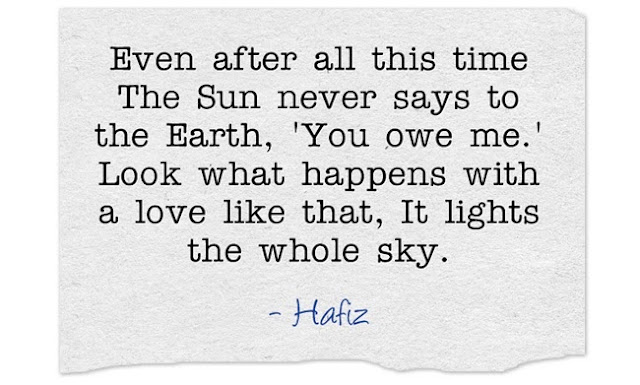 At the age of five or six years, I told my Dad that I would never ever opt for an arranged marriage, especially the transactional ''bride seeing'' ceremony, where the bride is paraded around like a fancy showpiece before a bunch of curious strangers, who are more interested in how much gold she is wearing than her IQ.

Dad, being my ever patient, serene hero, just smiled that calm, soothing smile that some of you are already familiar with and he said, ''Sure, that's fine."

I was expecting a full flung family drama, a storm, maybe even being thrown out for the audacity of breaking the much-treasured family tradition. How dare a girl even say such a thing to her parents, right?

Nothing happened. Dad was so cool. Then it struck me - maybe I am adopted. That's why it doesn't matter so much to him.

I did manage to summon the courage and ask Dad several times, "Ami an adopted child?"

Dad would laugh and ask, "What do you think? Whatever you think is the right answer."

That put me in a fix. What ami supposed to think, huh?

Now that answer added to more confusion. Of course, it didn't help that my younger sister was very keen to prove that I am adopted. She came up with the most bizarre theories that drove me nuts!

You can imagine  - World Wars 2 and 3 happened over some of those statements. You can imagine who won. Of course, the younger one always wins - do you have any doubts about this time-old Indian tradition of the elder one bowing out?

Okay, so coming back to what we were talking about.

As the years passed and my longing to join the spiritual order in Prashanti Nilayam grew by leaps and bounds, I told my parents when I was sixteen years old that I intended to serve Swami and embrace a life in the ashram forever.

They were cool about this too. What mattered to them was my choice.

Dad and Mom told me, ''First, you have to complete your education and then lets have this conversation again. If you feel as strongly about this as you do then, we won't stand in your way.''

The same year, when I prayed to Swami with tears in my eyes at the ashram in Kodaikanal, He completely ignored me and looked the other way. I went on crying and crying. Finally, through my tears, I heard his voice clear as crystal, ''Do you even know what it takes to be My student or disciple? You have no idea, no eligibility and no traits for ashram life. You are not even remotely eligible."

I was completely heartbroken. This is not what I expected. I had thought that Swami would be delighted to accept me. I was crushed. Or more accurately, my ego was crushed beyond recognition. I couldn't stop the tears from flowing. I sobbed like a child. I probably looked like a complete idiot.

Then I heard his voice again, brimming with love, "I shall protect you always as the eyelids protect the eyes. I am always with you - isn't that enough? Ashram life is not for you - enjoy what the world has to offer and come back to me. Come back only when the time is right, but not in many, many years. I will call you. I will send you a sign - only then. Do you understand? I know what is best for you. Have faith."

No, I didn't understand but then I didn't have a choice but to understand.

Looking back, I see that Swami was right. At the age of eighteen, I fell deeply in love with Sanand Ramakrishnan and my life took a completely different direction. On His part, Swami knew everything but He asked no questions about it at all.

The first time Swami came face-to-face with Sanand, He looked deeply into his eyes for several moments. I like to believe that Swami was ''checking him out'' like a parent does when checking out a prospective bridegroom for the daughter. Not only that, many years later, Swami went to the exact spot where my father was seated in the last row behind a pillar and asked him, not once but twice, for my marriage invitation! He took the invitation letter, blessed my father with an intense gaze and walked swiftly back. Within moments, the volunteers came out running with several prasad packets for all devotees in Whitefield ashram - at the time, this was unusual as it was not a time of any festival then.

I asked Seva Dals, ''What is the reason for the special prasad?"

They told me, "We don't know what the occasion is but Swami is very happy today. It must be related to a devotee."

I felt that the special prasad that day was for me. Just for me.

I also understood then what Swami said about my eligibility for an ashram life. He was right.

That one choice He made was for my happiness - it was not a rejection of me.

He took that decision for me out of absolute pure love and gave me the absolute freedom to live my life on my own terms for my own happiness.

As a parent, I know this - when you love your child deeply more than anything else in this world, you put your child's well-being, growth and happiness first.

In the end, it is the power of love that triumphs above everything else. For me and many others on the path, Swami's love came without any conditions, any price tag. He gave so much love and so much of Himself to us that we took His love and His attention for granted. He did not ever like us to talk about Him or ''advertise'' Him as He used t say, but He was there for all who came to Him. He gave all grace to all those who sought Him, keeping nothing for Himself.

I learned the power of Love through Swami's rejection. But the words still echo in my heart, ''Come back only when the time is right, but not in many, many years. I will call you. I will send you a sign - only then."
Inform

KParthasarathi said…
That is a beautiful writeup.A true Guru knows when an aspirant becomes eligible to be taken as a disciple.I learn when one is ready and desrving for the spiritual path,the Guru appears unsolicited before him/her.
It is nice that you have been advised rightly and who else knoiws more than a Guru.
September 11, 2013 at 9:40 AM

Unknown said…
Awesome writeup ...every time i get tired of browsing through mindless stuff and casually visit this site and find some "gems" of spiritual pointers which enriches life and the quest n search of the real truth..
September 11, 2013 at 10:41 AM

Swapna Raghu Sanand said…
@KP Parthasarathi: I completely agree with you Sir. A true Guru knows when an aspirant is eligible.

@Ajith Kannan: You won't believe how deeply moving and inspiring your words are for me. A day after writing this post, I came back to delete this post because I felt it won't be of any benefit or of use to anyone. But when I read your comment, I realized that it is a sign for me to keep writing what my heart tells me. I didn't delete this post after reading your comments. Thanks so much for your powerful, reassuring words. My prayer to God is simply this: Bless me, dear Lord, to write meaningful posts although I am aware that such posts are unlikely to be popular with a majority of people who are most likely to term it as 'rubbish'.
September 13, 2013 at 2:30 PM

chow and chatter said…
thanks for sharing your life and thoughts and nothing beats the love of motherhood hugs to you and pleased you found love
September 18, 2013 at 2:20 AM

Ajith said…
Thanks i m humbled by your comments about my comments ..Actually your blog was an answer to at least some of my friends who are spiritual seekers but feel like "struck" in their current worldly lives.So please keep doing the God (good ) job...

“You must not let your life run in the ordinary way; do something that nobody else has done, something that will dazzle the world. Show that God's creative principle works in you.”
http://www.goodreads.com/author/quotes/14650.Paramahansa_Yogananda

Shilpa Garg said…
The Guru being omniscient intuitively knows what is best for the student!!
September 19, 2013 at 8:59 PM

Vishnu said…
this article made me smile Swapna:) Not only because of your rejection of arranged marriage and your questions about if you were adopted or not (haha) but your desire to pursue a spiritual life. The guru was indeed wise to reject you - why are some of life's biggest rejections filled with so many gifts?
September 22, 2013 at 2:17 PM

Swapna Raghu Sanand said…
@Ajith - Thanks so much for the kind words. Grateful to you for these encouraging words and will do my best to keep writing on spiritual topics.

@Shilpa Garg - Thanks for reading the post and sharing your thoughts too.

@Rebecca - Thanks and warm motherhood hugs to you too, dear.

@Vinaya - Yes, truly. Love is what makes the world go round and a Guru's love is as vast and boundless like an ocean, charged with divine energy. Thanks for reading my post, Vinaya.

MOHAN SUNDARAM said…
@ Swapnaji, Ur posts r inspiring. U don't hurt anybody, any caste, linguistic group or religion. There r some bloggers whose only job is to abuse some community or other. Once a sannyasi told me that GURUBHAKTI alone is enough. Pls keep up ur good work.
November 24, 2017 at 9:28 AM

MOHAN SUNDARAM said…
@ Swapnaji, Your posts may not be popular. Please don't bother about popularity. Some people write trash & become popular. What matters is the contents of ur posts.Your posts show that you are a good, pure- minded person.May God & your Guru bless you.
November 24, 2017 at 9:54 AM

Aarthi Krishnan said…
Sairam sis. Swapna, I came across your blog today by 'accident' when I was reading something on bro. Aravind's blog. I did read quite a lot of posts on your blog but this one really caught my attention. Can you send me a test mail from your mail id to mine? I will share my thoughts on this post to you by mail. :)
January 3, 2019 at 2:29 AM