Showing posts from January, 2013
Show all

- January 28, 2013
A month ago, Penguin India grabbed the attention of many Indian readers by conducting a live chat with its famous, best selling author Shobha De. I have observed similar  'livechat' sessions conducted by Penguin India on Facebook. But I've got to say no one does it like Shobha De. She isn't the typical author in any sense. She won't try to be diplomatic to keep her fans happy. She gives as she gets without mincing words. No hypocrisy, what you get is honesty. These days, with more and more writers marketing themselves on social media as paragons of patience, this originality came as a whiff of fresh air. Her responses are not of a diplomatic author who is playing to the gallery and wanting to promote a book or a brand. I loved the way she got into responding to so many queries with her typical saucy, original thoughts.
For instance, a guy wrote "i dont know why but i hav never been attracted by your books,plz plz tell me why should i read your books?
Shobha De …
6 comments
Read more

Jyotiraditya: My Mother is wrong, I am not an only child

- January 25, 2013
Recently we were visiting the home of an eminent retired High Court judge from Kerala about whom I have written in this post. So the lovely wife of the retired HC judge was talking to Adi and making tea when she mentioned that it must be very lonely for Adi to be the only child and I mentioned that he has a very solid network of friends in the society building where we live.
The moment I said that, Adi jumps up and says to her, almost angrily, "My mother is wrong. I am not an only child. I have two brothers and two sisters - the only thing is they aren't staying with us but they are my brothers and sisters. I am not an only child."
I told her very softly that Adi is referring to his cousins and she smiled at me lovingly.
Seeing the passion and conviction with which Adi was saying this, she gently and lovingly said to him, "What a lucky boy you are to have two brothers and two sisters."
The way Adi looks and values his relationships is exactly how I did at his age,…
15 comments
Read more

- January 19, 2013
It was a day that started just like any other day, though for six year old Jyotiraditya it was declared a holiday because of the cold. Still, it was a rush filled morning, punctuated by a hurried breakfast and tapping to music played by the radio jockey amidst many ad jingles.
Sanand dropped me off at my office and he went to his office with Adi.

The usual practice when Adi has holidays is that he spends time in his father's office, does a bit of studies, plays games online and on the PSP and does coloring or drawing on sheets. Basically, he gets a free run.
This particular day, a retired High Court judge visited Sanand's new office and that is where he met six year old Jyotiraditya. You can imagine how funny that must have seemed to the eminent judge. He must have wondered what a six year old is doing at a law firm. But for the six year old, he was wondering what this person is doing in his father's office. So, this mutual 'admiration' committee struck up a conver…
9 comments
Read more 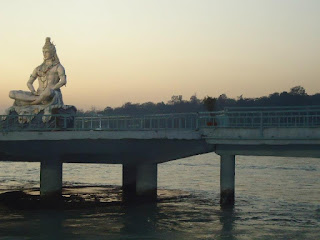 Happy 2013, dear friends! For me, the year began with Ganga darshan and aarti.
My six year old son Jyotiraditya began to play in the shallow end of the ice cold Ganga. Then he closed his eyes and began to chant the Mritunjaya mantra with total concentration. It was a priceless moment for me as a mother. He did the chanting with absolute conviction and passion.

Some foreigners who were humming along with the aarti suddenly pointed towards Adi in exclamation. They began to admire him in soft exclamations and started to click his snapshots. That moment of electric energy was broken instantly. That is one thing I want to share – in places of worship and where prayers are chanted, it is important to avoid taking snapshots. It instantly cuts and interferes with the electric energy of positive powerful vibrations that are a result of mantra-chanting.
For me, as I stood before the Ganga aarti, the incredible power, the force and the energy of Mother Ganga filled my senses like intoxic…
6 comments
Read more
More posts